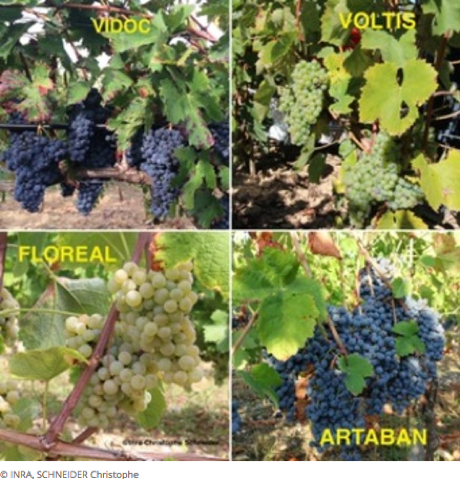 Earlier this year the Owl quoted with approval an assesssment that the natural wine movement is "a form of luddism, a sort of viticultural anti-vax movement that lauds the cidery, vinegary faults that science has spent the past century painstakingly eradicating." That view was reinforced by a visit to The Festival at Basket Range nestled in the Adelaide Hills where at a fun day out but I must say that most of the wines were not to my taste.
But maybe some relief is at hand for these intrepid natural wine pioneers. French wine scientists have come up with four revolutionary supergrape varieties they say are impervious to rot and thus require almost no pesticides. That will get rid of one of the major problems confronting those trying to make wine organically.
The new red and white grape types are grown at the National Institue of Agronomical Research (Inra) in Colmar, eastern France. On its website INRA summarises the project in this way:
"In the year 2000, INRA embarked on a breeding program with sustainable resistance to the major fungal diseases of the vine. This project has just resulted in the registration in the official catalog of four varieties with natural resistance to mildew and powdery mildew, and whose wine quality is at a level equivalent to that of traditional grape varieties. Artaban, Floreal, Vidoc and Voltis are paving the way for efficient viticulture that is more respectful of the environment, by drastically reducing the use of plant protection products."'
Labels: natural wines organic wine