Everyday wines, good bottles that are moderately priced and easy to drink yet are still interesting enough to inspire wonder and to be deeply pleasurable.

The highest praise I can give as a journalist is to say when I read something written be somebody else is that "I wish I had written that". I had one of those rare moments this morning with a piece in The New York Times by the paper's wine columnist Eric Asimov. It was such a rare example of commonsense by a person whose comments on wine are normally about drinks that are way outside what I can normally find or afford. 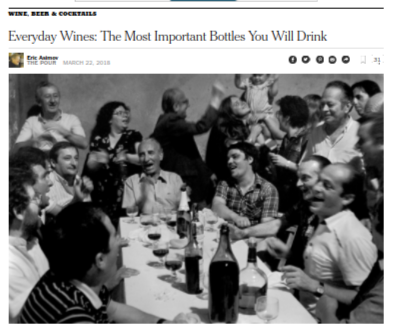 This was a wine writer doing that rare thing of writing about what his ordinary readers might actually drink.
Books have been written about the marvels of Montrachet, the complexities of Domaine de la Romanée-Conti and the luscious wonders of Yquem, all remarkable wines that most people can only dream of being able to afford.

Instagram is lined with photos of the proverbial unicorn wines, bottles so rare that they are sighted with the frequency of mystical animals. Somehow, these shots often seem to be posted by sommeliers, proving that such bottles are scarce only for those without access to other people’s money.
As much attention as is paid to the rare and profound bottles that fire the imagination, far less is devoted to the sorts of wines that people might actually consume at any given weeknight meal.
Yet the bottles we might open every day are actually the most important wines in our lives, just as the art we live with in our homes is ultimately more meaningful than what we might see on an occasional visit to a museum.

Asimoc offered his readers this advice.