By David Farmer
It is fun to be part of the wine business and many of the millions involved find you can blend work and pleasure. In turn many customers make wine a facet of their lives; after finding wine demands attention. Perhaps wine is alive after all, as it seeks a response, needs an appraisal all of which at least gets us talking.
These thoughts drifted by while drinking the new Karrawirra Single Vineyard 'Ebenezer' Barossa Valley Cabernet Sauvignon 2015 the second of four single vineyard releases. On Friday I sipped the first, the  Single Vineyard 'St Kitts' Barossa Valley Shiraz 2015 which is monumental.
You get intense and questioning when examining your own wines and I wondered how the Ebenezer flavours could open up a different perspective from those captured in the new Grandma Raethel Barossa Valley Cabernet Sauvignon 2015 and the new Grandma Raethel Barossa Valley Shiraz 2015 when the vineyards are so close. Talk to me, tell me, but they could not.
The first Grandma Raethel was a 2001 Shiraz and it is still perfect. I add the Raethel name as our tiny tribute to all the pioneers that came so far to build the Barossa Valley. 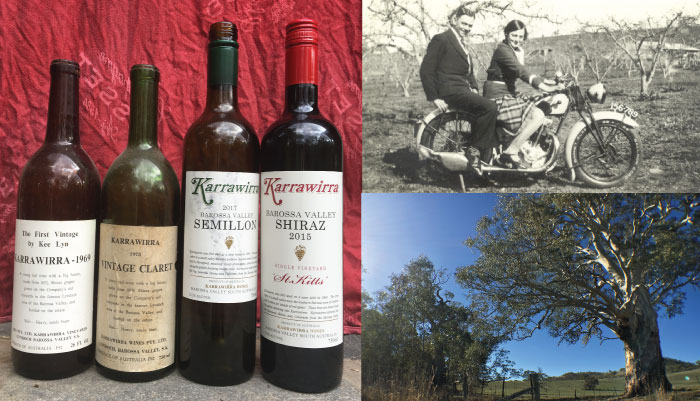 The first vintages of Karrawirra from 1969 and 1973 and with the release of the 2015’s the dream is very much alive. The land of Karrawirra is the land of big, old red gums and these are close to the original winery. The Grandma label depicts Betty (Grandma) Raethel. She grew up in Moculta, the birthplace of the legendary winemaker Max Schubert. As a child Betty used to play with the Barossa identity Peter Lehmann. The label photo was taken in 1934 and shows a youthful Betty with her brother Walter.


Expressions like it is raining cats and dogs create a mental picture about really heavy rain. Similarly in the wine world every Tom, Dick and Harry is only too eager to write a tasting note, a mental picture of a wine, for your guidance. Alas I feel most writers actually believe their word picture captures aroma and taste but as a back-up also invent a point score; these days often out of 100.
Brother Richard, hearing me lament that the structure of wine scoring needs to be pulled down and rebuilt; thought about this and recreated the old five point score. You see, a hundred point score has led to inflation and hardly a wine is pointed below 85/100. Great wine is rare and when a 50,000 case lot of Semillon Sauvignon Blanc from Margaret River gets 95/100 I don’t believe it.
The Richard scale starts at 0 and to climb above this the wine must have enough appeal to be ordered over other alcoholic beverages. Most wine you drink will be 1 or 2 with a few climbing to 3. This leaves 4 and 5 for the glorious few which will be rare.
A mate recently sold one bottle of Penfolds Bin 60A 1962 back to Treasury wines for $6000, this is a 5 score red and now very rare.
From the Glug stable the type of red staples to drink are the  Kitts Creek Barossa Valley Cabernet Shiraz 2015 and the  Restless Farm The Pig Barossa Valley Shiraz 2015. While for a white I like  Knotts Adelaide Hills Chardonnay 2017.
So Drink Well.
Labels: Barossa David Farmer