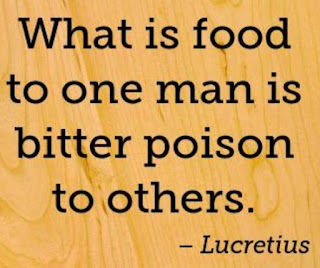 The Owl has long been bemused by the idea of rating wines according to quality. The whole notion of quality seems very subjective to him. As the Roman poet and philosopher Titus Lucretius Carus (known as Lucretius) wrote in the first century BC: "quod ali cibus est aliis fuat acre venenum" - what is food for one man may be bitter poison to others. Or to put it another way, everything is relative - what one person values, another may think worthless.As I wrote on this blog a month ago, "People can get more than a bit precious when they try and evaluate wines. Is this a 92 or a 94 and if so what's the reason for the difference? Ask the same questions the next week and that 92 is just as likely elevated to a 95 with the 94 sacked to a mere 89. It's all a bit of a nonsense really as countless academic studies of wine ratings in shows around the world have proved."
Yet choosing a wine when most of the offerings have not been tasted is a near impossible task. So what is a drinker to do? Stick to something tried and true is an obvious, and most likely, choice. Another is to assume that price is an indicator of quality. As a recent Bloomberg article How to Judge a Wine Without Tasting It put it, an ultimate indicator of quality is price.
But experience has told the Owl that this method where prices are influenced by the quality ratings pronounced by others is not an accurate guide to what most wine drinkers actually like. Wine rating connoisseurs have their own particular views as to what is good and bad and they probably will not be the same as those of someone wanting something pleasant to drink with dinner.
Now the Owl should be described as an ordinary drinker. He likes his evening tipple but as a pensioner is constrained by what that tipple costs. Yet he wants to be helpful to people confronted with that array of labels in their local wine outlet but he does not see much point in recommending wines that he, along with most of his potential readers, cannot afford to drink. Sure there will be special occasions when we decide to act like mugs with money and bust the budget but it is the wines we can drink and enjoy every day that most interest me.
Hence the decision to start giving The Owl's own ratings which will combine an assessment of a wine's quality and its value for money. By definition it means that some wines that most critics call great will not will not feature as high on this blog as elsewhere.
The hope is that the ratings will help you find good bottles that are easy to drink at value for money prices that will still give a pleasure that is out of the ordinary.
Labels: The Owl's ratings