At Piper-Heidsieck they have been waiting since 2008 to declare a vintage and with the 2018 harvest now in they think they will have one. Like most champagne houses, the Piper people have dealt with nine not-so-flash climate years. Now they've had one where grapes benefited from a wet winter that recharged water tables which the vines would tap throughout a hot, dry summer. 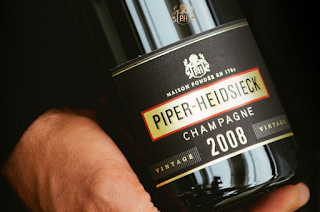 Quite apart from an excellent harvest allowing producers like Piper-Heidsieck to "declare" a vintage, the higher sugar content of 2018 will work wonders in broadening out some rather thin wines from previous vintages in making Champagne's staple non vintage product.
The abundant harvest will allow wine-growers and houses to “rebuild their reserve (wines put aside in good years), which will enable them to face the possible vagaries of the climate in the future”, said the champagne wine board, CICV, in a comment to London's Daily Telegraph. Hail and frost in previous years meant some champagne producers’ reserves had reached perilously low levels.
Certainly it will lower the amount of sugar that producers have to add to the "dosage" which makes most NV champagnes drinkable.
The newly opened Quay restaurant in Sydney provides some interesting information on its wine list, disclosing, for example, that the 2002 Bollinger (1829) R.D. Extra Brut has dosage of 8gm/litre.